"Doktor Thrill and Snakelady of the Carnival 45x34"

Art Brokerage: Earl Linderman American Artist: As a child, growing up in the '30s and '40s, Earl Linderman was fascinated by the comic strips and Saturday matinees. He would spend countless hours drawing these characters, forming the foundation of his future as an artist of extraordinary imagination and execution. By the time he was in high school, Linderman was creating his own art, featuring heroes involved in adventurous dramas. Things have not changed much for the man who, since the early '70s, has been exciting art aficionados with his series, The True and Incredible Adventures of Doktor Thrill. "For me, the imaginative world of my art is a slam-bang, dynamite adventure," states Linderman. "Just as Matisse did not wish to become a 'prisoner of reality' in his art, I, too, have taken the raw stuff of life and invented a panorama of electric personalities. The idea for Doktor Thrill came in 1970 when Linderman was vacationing in San Diego. He was sitting on Fisherman's Wharf at Crystal Pier, "with the fog rolling in, the moon coming up, and the waves lashing against the pilings," when his imagination kicked into high gear, and Doktor Thrill was born. During the next three years, Linderman drew sketches of his character, who originally appeared as Captain Evil, a mysterious looking man one might find in novels of intrigue. These initial works were influenced by German Expressionism. Earl Linderman, who was born in Endicott, New York, graduated from Pennsylvania State University with a Ph.D. in Art Education, and taught art at Sacramento State University, Oregon State University and Arizona State University, where he also served as Chairman of the Art Department. "I work continually, consistently," exclaims Linderman. "I always have been driven; something inside of me keeps nudging me to paint and draw. It is what I love to do. It is my silent friend." It also is brilliant, innovative, vivid, original, and outrageous. Linderman begins each piece with a drawing, which serves as a preliminary study for the painting -- although not all of his drawings become paintings. Each drawing, however, is a finished piece of art in itself. "Drawings give us the violins," says Linderman, "whereas paintings are the orchestra in dramatic crescendo." Linderman also includes a piece of prose with each painting, which extends the story of The True and Incredible Adventures of Doktor Thrill, and admits that if he had not turned to art, writing would have been his chosen field. Listings wanted.

MORE BY EARL LINDERMAN VIEW ALL 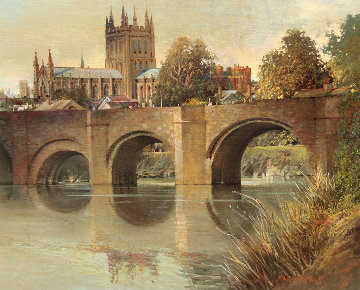