Art Brokerage: Mark Erickson American Artist: Mark Erickson was born in Southern California and completed his education in California, Germany and Italy. He completed his art education at the Academy of Art College and the Art Institute in San Francisco. Erickson has exhibited in New York, Los Angeles, San Francisco and New Orleans. He has collectors in Germany, France, Japan, Italy and across the United States. Erickson concerns himself with transcending the picture plane, and in his newest series of paintings he plays with both flattening the surface and creating abstracted objects. They float behind his imaginary creations, enabling a world of depth in the work's black galaxy. When asked about the origin of the apparent lettered shapes and colors, he calls them 'melted cartoons' and in a style he refers to as 'Cartoonesque.' Mark was influenced by the flat colors and text balloons of comic books and began to abstract them from the inside out. He exaggerates the effect, creating paintings in which composition is more important than content. By mixing metallic paints with oils & acrylic, he is further able to dramatize the floating elements, letting them shine in an eye popping arena before the blackened plane. The exaggerated spaces in Erickson's paintings give the works a magnificent presence and power. Listings wanted by Art Brokerage.

MORE BY MARK ERICKSON VIEW ALL 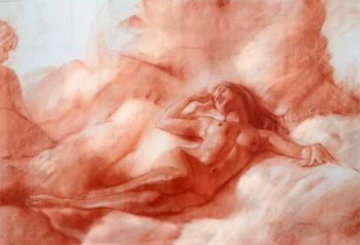 Works on Paper (not prints): Chalk on Paper 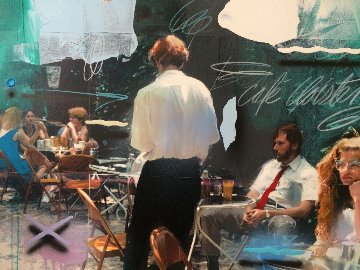 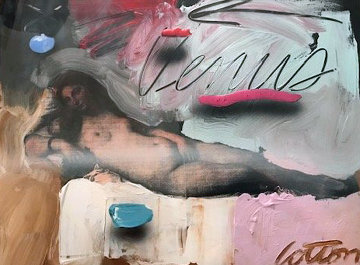 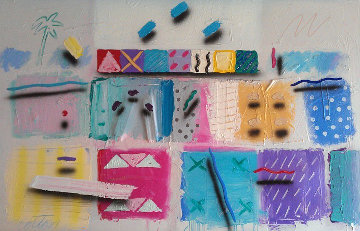 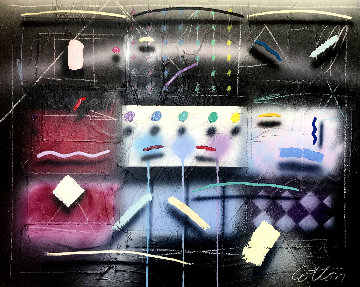