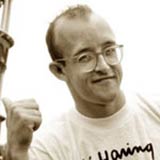 American artist Keith Haring was best known for his graffiti-inspired drawings, which he first made in subway stations and later exhibited in museums.Artist Keith Haring was born on May 4, 1958, in Reading, Pennsylvania. He moved to New York City in 1978 and began using the city as his canvas, making chalk drawings in subway stations. His art was eventually seen everywhere from public murals and nightclubs to galleries and museums around the world. He was also known for his activism in promoting AIDS awareness. He died of AIDS-related complications on February 16, 1990, at age 31. Listings wanted.