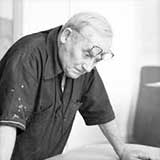 Joan Miró was a seminal figure in 20th-century avant-garde painting. The Spanish artist’s innovative use of line, organic shapes, and color represents a major contribution to Surrealism. Representative of his ability to conjure evocative space—Miró’s famed triptych Blue I,II,II (1961), portrays a floating world using only blue, orange, and black. “Little by little, I've reached the stage of using only a small number of forms and colors,” the artist reflected. “It's not the first time that painting has been done with a very narrow range of colors. The frescoes of the tenth century are painted like this.” Born on April 20, 1893 in Barcelona, Spain, the artist first studied commerce before defying his parents and enrolling at the art academy in his hometown. In 1919, Miró moved to Paris where he fell into the Surrealist milieu, befriending André Breton, Max Ernst, Jean Arp, and André Masson. Miró’s work profoundly influenced several American painters, including Arshile Gorky and Mark Rothko. The artist died at age 90 on December 25, 1983 in Palma de Mallorca, Spain. Today, his works are held in the collections of the Art Institute of Chicago, The Museum of Modern Art in New York, the Tate Gallery in London, and the Fundació Joan Miró in Barcelona, a museum dedicated to the artist and his legacy. Listings wanted. Check out our new sister site at Bluechipartbrokerage.com