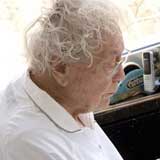 Art Brokerage: Hans Erni Swiss Artist: b. 1909-2015. He is a Swiss painter, designer and sculptor. Born in 1909 in Lucerne, Switzerland, Hans Erni studied to become a professional artist at the School of Arts and Crafts in Lucerne from 1927 to 1928 and at the Académie Julian from 1928 to 1929. Erni's style was influenced by that of Picasso and Georges Braque, and Erni is often referred to as The Swiss Picasso. The artist's prolific career reached new heights in 1979 when the Hans Erni Museum was inaugurated in the town where he was born, situated on the grounds of the Swiss Museum of Transport. The museum contains the largest collection of Erni's artwork in the world. The artist is still alive today, and celebrated his 100th birthday in 2009. Sadly, the artist died March of 2015. Listings wanted.