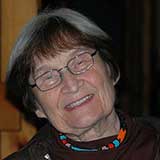 Art Brokerage: Jaroslava Brychtova Czechoslovakian Glass Artist: Jaroslava Brychtová began to experiment with casting and carving glass in the late 1940s. She founded the Center for Architectural Glass at the Specialized School of Glassmaking in 1950. Like Libenský, Brychtová studied at VŠUP. The war interrupted her education, but she later finished her studies with a concentration in sculpture. Her teachers were Karel Štipl (from 1945 to 1951) and Jan Lauda (from 1947 to 1950).Jaroslava Brychtová's career at the Specialized School of Glassmaking in Železný Brod spanned 1950 to 1984. The couple began their long collaboration in 1954. When Brychtová created a sculptural glass bowl modeled after a sketch of a bowl-shaped head that Libenský had made. According to Libenský, the two worked well together because he was trained as a painter, and she as a sculptor. Much of Libenský and Brychtová's architectural work was done for buildings in Czechoslovakia, including two windows, created for the St. Wenceslas Chapel in Prague's St. Vitus Cathedral. Built in the fourteenth century, the historic chapel was reconstructed by the Czech government between 1961 and 1964. Libenský and Brychtová were selected by competition to replace the chapel's original stained glass windows, which dated from 1912-13. The artists created an abstract design for the windows that, in its modern simplicity, departed from the ornate, early sixteenth-century decoration of the chapel. To relate the new to the old, Libenský and Brychtová used the muted grey-brown, grey-green and pink hues in the chapel's frescoes as the predominate colors in their windows. Outside of Czechoslovakia their architectural glass work was seen in World's Fair exhibitions and Czech Embassies. At Expo '67 in Montreal they created three large sculptures for the Czechoslovakian Pavilion's "Hall of Century and Traditions". These were "Blue Concretion," "Sun of the Century" and "Large Conus". According to Corning Museum of Art curator Tina Oldknow, these large-scale sculptures in glass were "a revelation" to the American Studio Glass artists who saw them, including Harvey Littleton, Dale Chihuly and Marvin Lipofsky. Listings wanted by Art Brokerage.