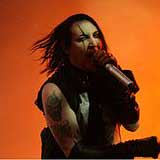 Art Brokerage: Marilyn Manson American Artist: b. 1969. Brian Hugh Warner (born January 5, 1969), better known by his stage name Marilyn Manson, is an American musician, songwriter, actor, painter, multimedia artist and former music journalist known for his controversial stage personality and image as the eponymous lead singer of the band Marilyn Manson, of which he is the founder and only constant member. His stage name was formed by juxtaposing the names of two American cultural icons, namely actress Marilyn Monroe and Manson Family leader Charles Manson. He is perhaps best known for his songs and albums released in the 1990s, such as 1996's Antichrist Superstar and 1998's Mechanical Animals, which along with his public image earned him a reputation in the mainstream media as a controversial figure and a negative influence on young people. Manson has been ranked number 44 in the Top 100 Heavy Metal Vocalists by Hit Parader, and has been nominated for four Grammy Awards. Manson stated in a 2004 interview with i-D magazine to have begun his career as a watercolor painter in 1999 when he made five-minute concept pieces and sold them to drug dealers. On September 13–14, 2002, his first show, The Golden Age of Grotesque, was held at the Los Angeles Contemporary Exhibitions Centre. Art in America's Max Henry likened them to the works of a "psychiatric patient given materials to use as therapy" and said his work would never be taken seriously in a fine art context, writing that the value was "in their celebrity, not the work". On September 14–15, 2004, Manson held a second exhibition on the first night in Paris and the second in Berlin. The show was named 'Trismegistus' which was also the title of the center piece of the exhibit – a large, three-headed Christ painted onto an antique wood panel from a portable embalmers table. Manson named his self-proclaimed art movement Celebritarian Corporation. He has coined a slogan for the movement: “We will sell our shadow to those who stand within it.” In 2005 he said that the Celebritarian Corporation has been "incubating for seven years" which if correct would indicate that Celebritarian Corporation, in some form, started in 1998. Celebritarian Corporation is also the namesake of an art gallery owned by Manson, called the Celebritarian Corporation Gallery of Fine Art in Los Angeles for which his third exhibition was the inaugural show. From April 2–17, 2007, his recent works were on show at the Space 39 Modern & Contemporary in Florida. 40 pieces from this show traveled to Germany's Gallery Brigitte Schenk in Cologne to be publicly exhibited from June 28 – July 28, 2007. Manson was refused admittance to Kölner Dom (Cologne Cathedral), when he was in the city to attend the opening night. This was, according to Manson, due to his makeup. Manson revealed a series of 20 paintings in 2010 entitled Genealogies of Pain, an exhibition showcased at Vienna's Kunsthalle gallery which the artist collaborated on with David Lynch.