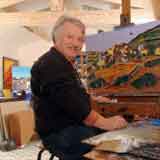 Art Brokerage: Jean-Claude Quilici French Artist: b. 1941. Jean-Claude Quilici was born of Corsican origin in the heart of Marseille in 1941. Still quite young, he had an inclination towards painting and began to attend classes at the official "Ecole des Beaux-Arts" and soon afterwards, recognizing his gift for painting he was taken under the wings of the great masters of "l'Ecole de la Peinture Provencale" with whom he was to show his first paintings in his native town in 1958. Henceforth, painting became his vocation. Between 1960 and 1971, he received numerous painting awards which further distinguished the beginning of the young artist and during this period several shows of his works were organized by several French galleries. In 1971, the US will welcome him : Washington, New-York, Atlanta, Philadelphia, Albuquerque...and in 1973, he discovers New Mexico. In 1980, Jean-Claude began his career in Japan: Form Tokyo to Osaka via Kobe, Shizuoka, Fukuoka, Nagano, Saporo...All this cities arranged shows of this paintings which were highly acclaimed. His prints and oil paintings have been shown permanently in Japan for the past twenty years which permitted the artist to be well known by both Japanese art collectors and patrons. During his career, he was invited to create various artistic works such as the monumental fresca for the University of Corte (40 meters in length and 4 meters in height) and the one for Marseille's subway being 130 meters in length. Listings wanted.